The coastal path from Porthgwarra to Lands End, along the southern edge of Cornwall's Penwith Peninsula, provides views of some of the most dramatic and beautiful coastal scenery to be found anywhere in the world. No surprise then, that by the time we completed the walk I had enough images in my camera to keep me supplied with source material for months to come.

Which is why it's surprising that the first piece of work to emerge from this little expedition was not only an inland view, but it was of an image that I hadn't actually noticed when taking the photograph!

What I was focused on when I took the photo was a network of ancient field walls (they are, for me, the perfect blend of the historic and the sculptural - they are practical, beautiful and enigmatic structures that I find quite difficult to work into print, probably because they're already such good art in their own right). 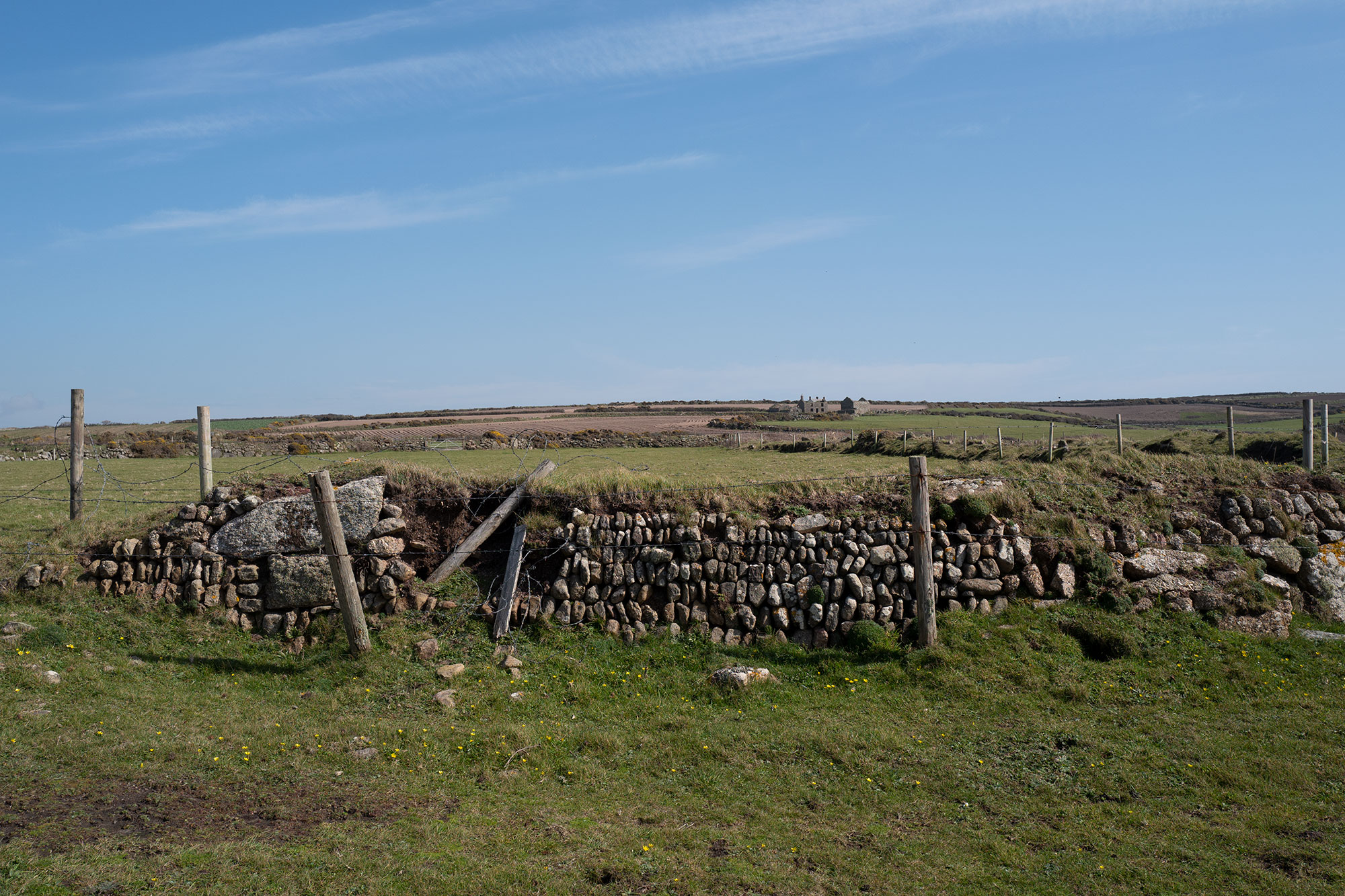 Here's the photo - one a series I took of the walls. This is the one I intended to use - my plan being to make a wide-format print that contained only the stones.

It was only when I zoomed into the picture that I noticed, some way off in the distance, the ruin of a farmhouseM - and I can honestly say that I didn't notice the building when I was taking the photo. Discovering it on my computer screen was like finding the image of a ghost that had magically allowed itself to be photographed. 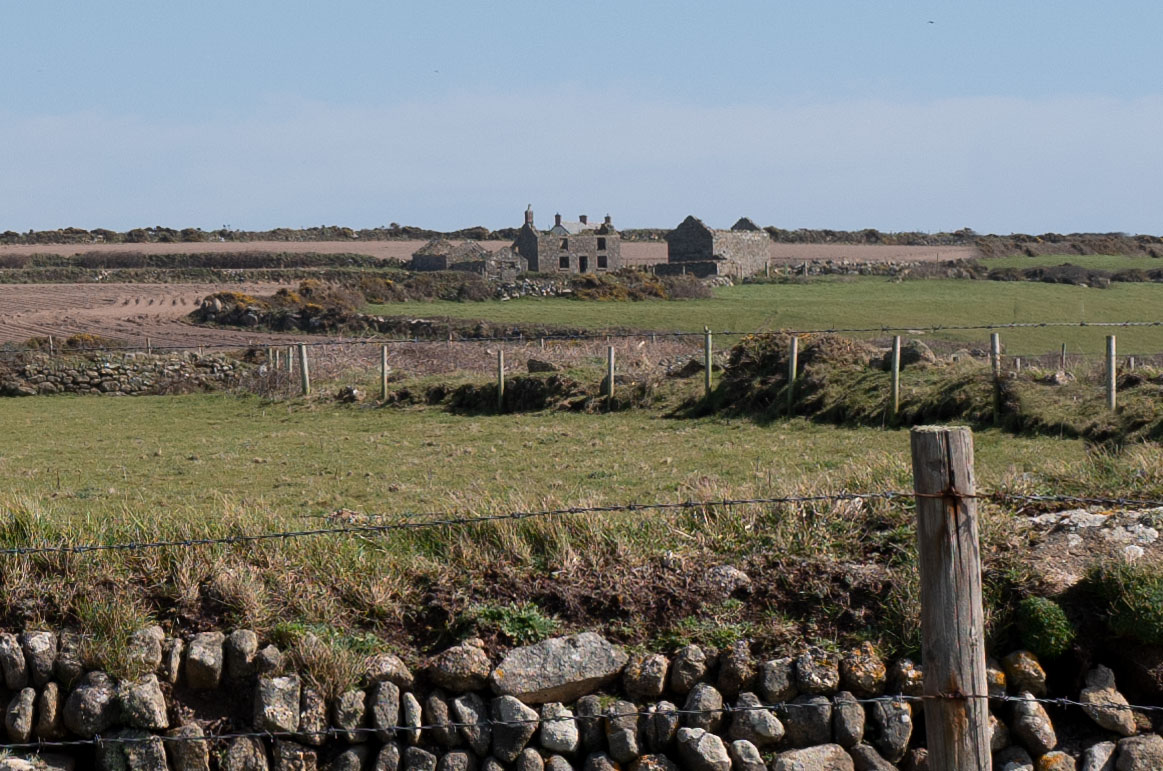 As a composition, it isn't up to much - so I started to play.

Here's the farmhouse, with the rest of the photo cut away. 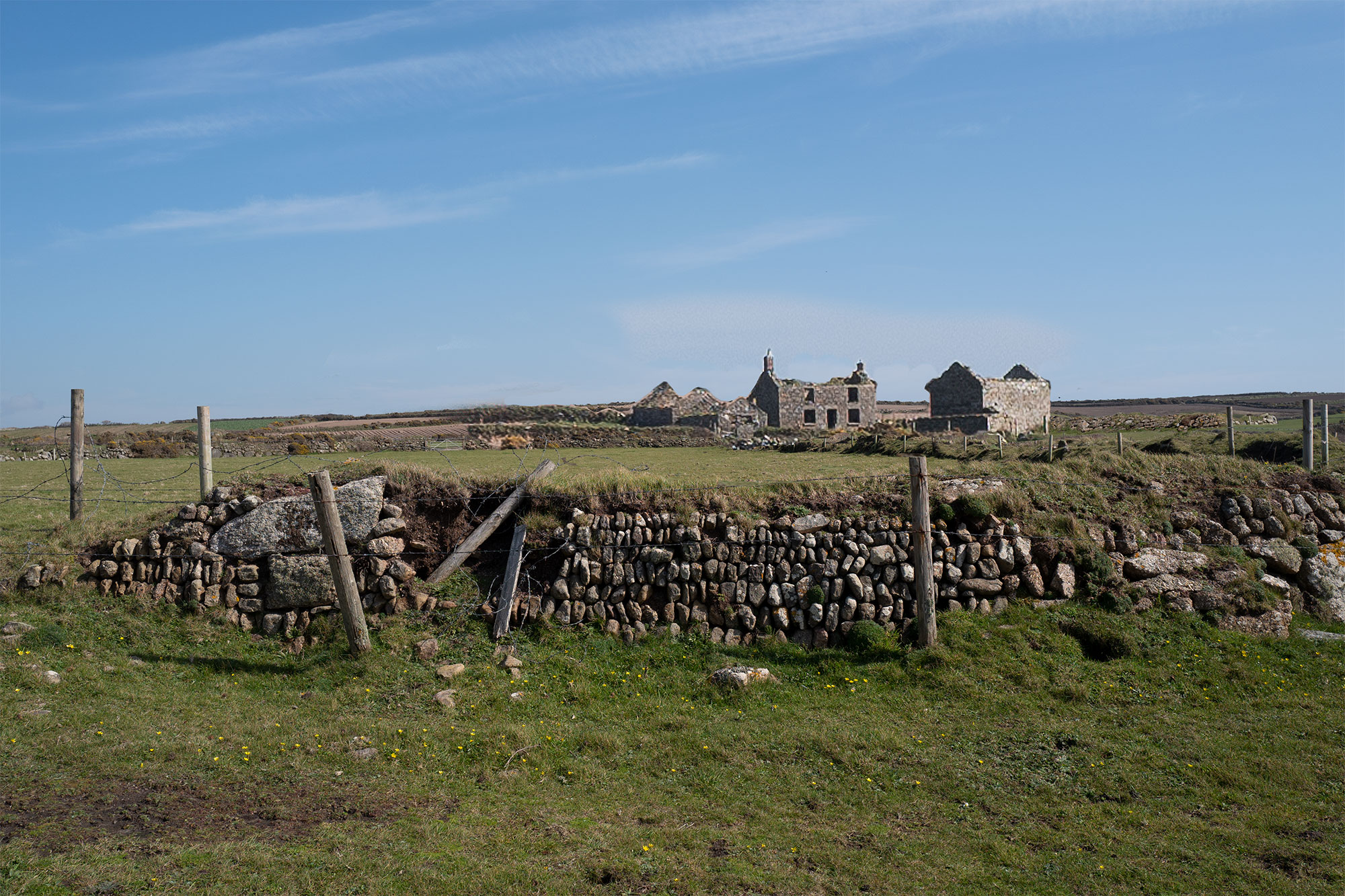 And here it is again, brought closer and integrated with features closer to where I was standing. Comparing this with the previous photos, I'm surprised at how well the buildings relocated - the scene looks as natural as it needs to be. I probably did a lot more work with this image than I remember... it took about a week to get to the final image - this element was done very early on.

Here's the picture reduced to hard black and white. The effect of the 'threshold' process on the sky is what gave me the idea that this could be a nightime scene.

There was also something about the 'shape' of that sky which made me think of hawthorns (although, I have to admit, none were growing in the area where the photo was taken - so I had to uses photos I'd taken a little way up the coastline in South Devon - similar landscape conditions though). 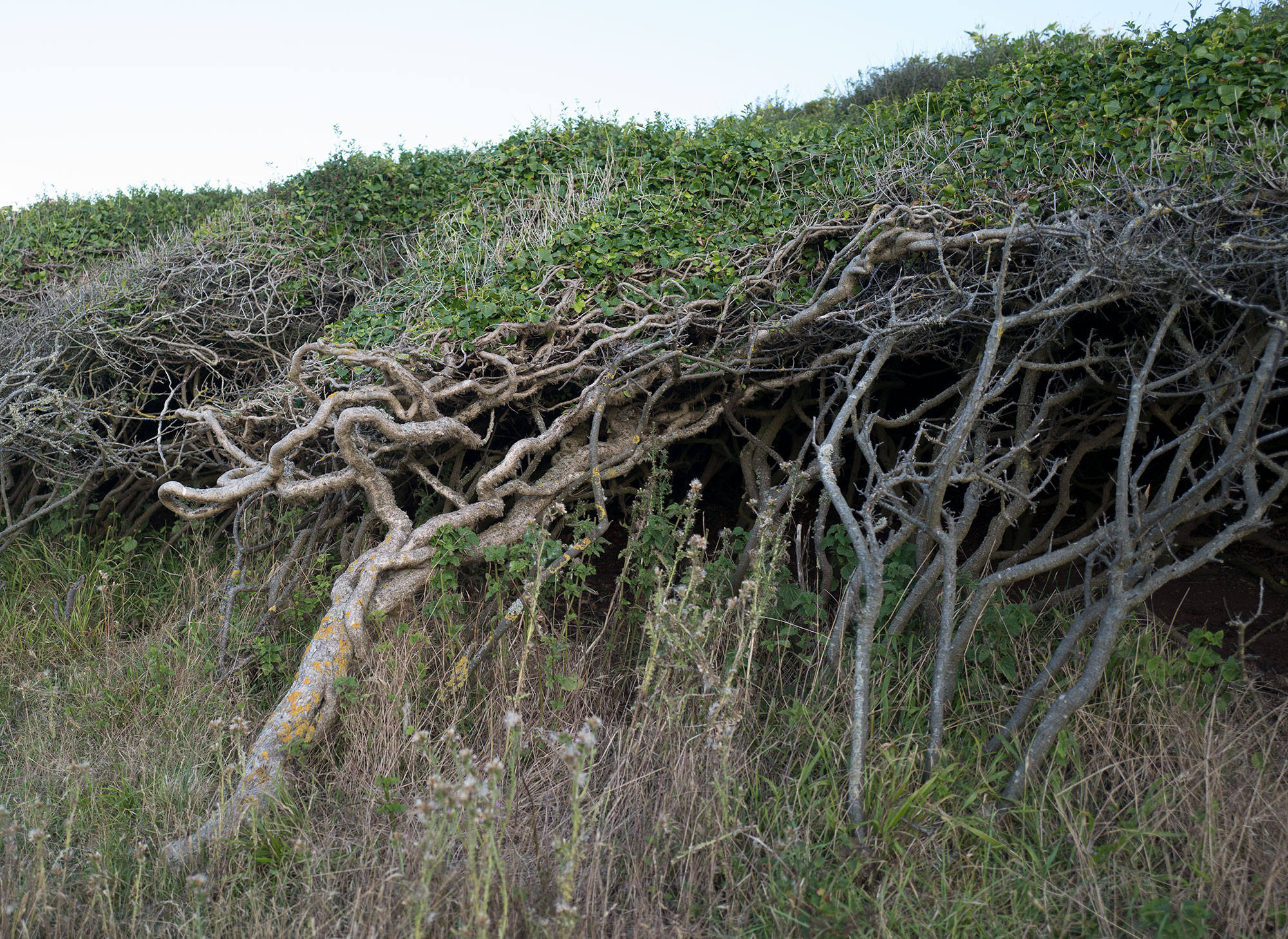 This is a photo I initially used to create the tree... 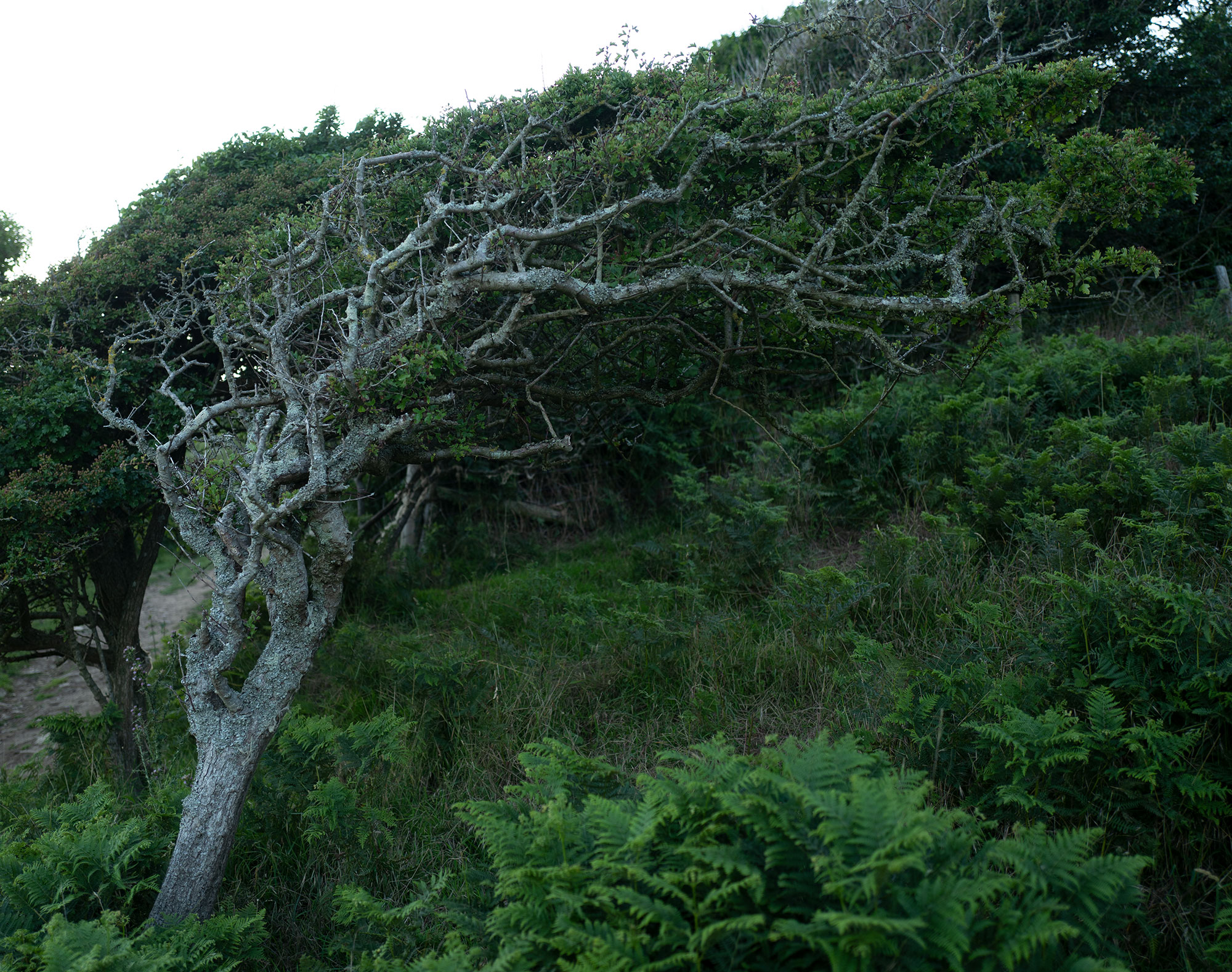 ...but I added some elements from this one... 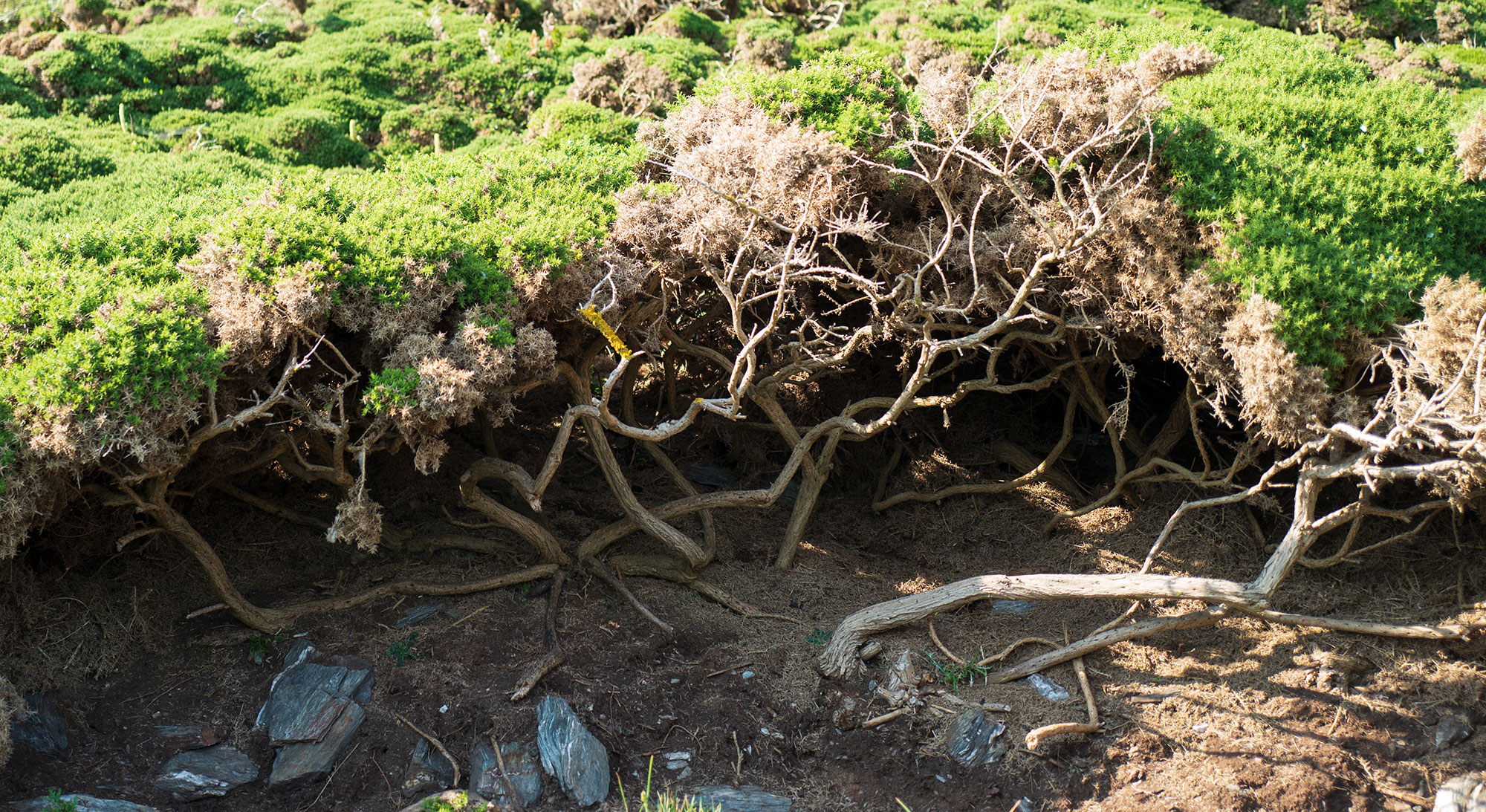 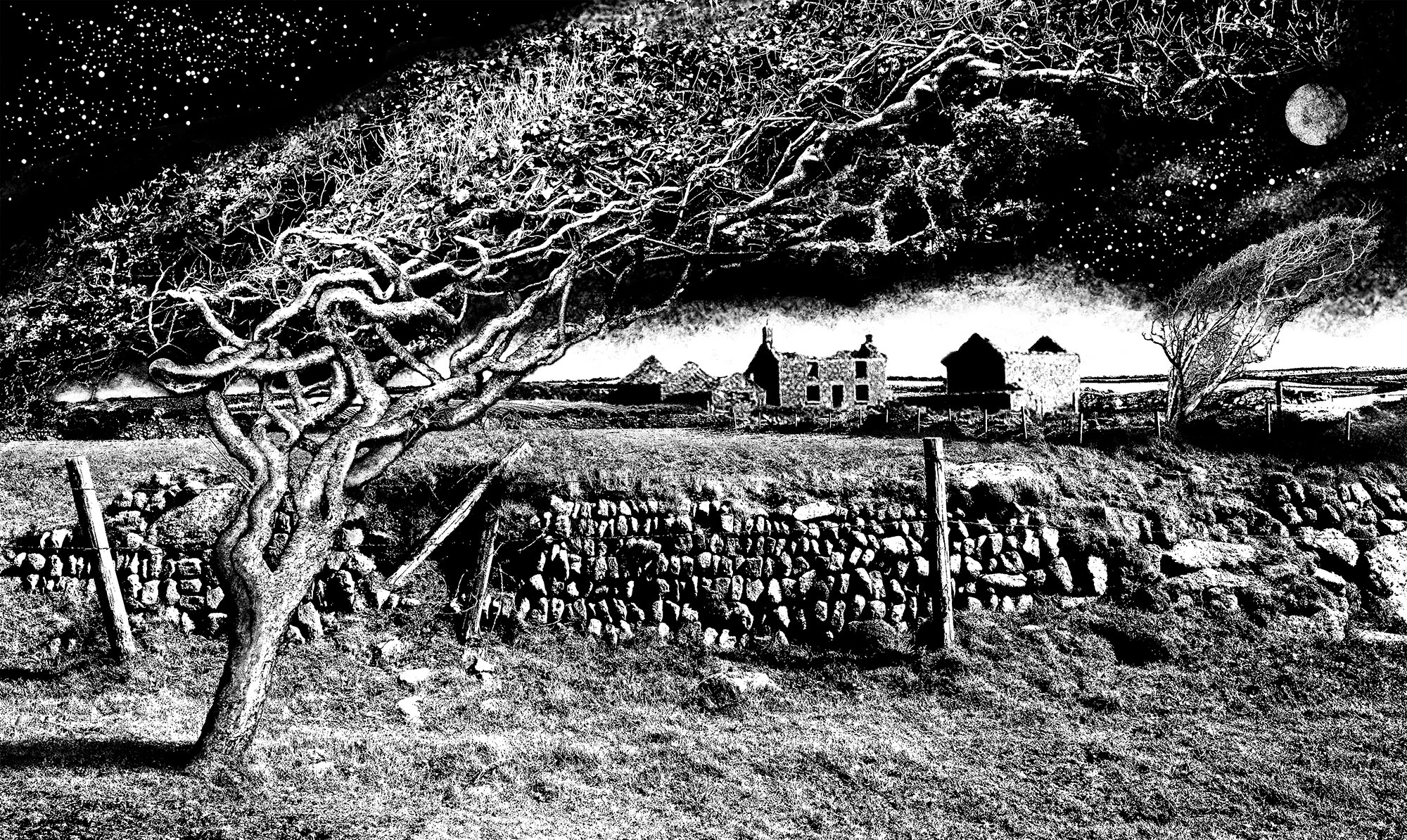 Here is the resultant tree, colour removed and placed in the landscape so it both frames the farmhouse and merges with the starscape.

I decided to add another hawthorn and, if you compare this images with some of the earlier pictures, you'll see I also moved the fence posts around a bit.

I usually try to get to this stage of development before I begin the real work of printmaking  (although this approach may change with some of the future print projects I have in mind). The only thing I was undecided on was whether or not to use more than one colour - but because I was only considering background colours that would be printed under the black, it was a decision I was able to put off until later. 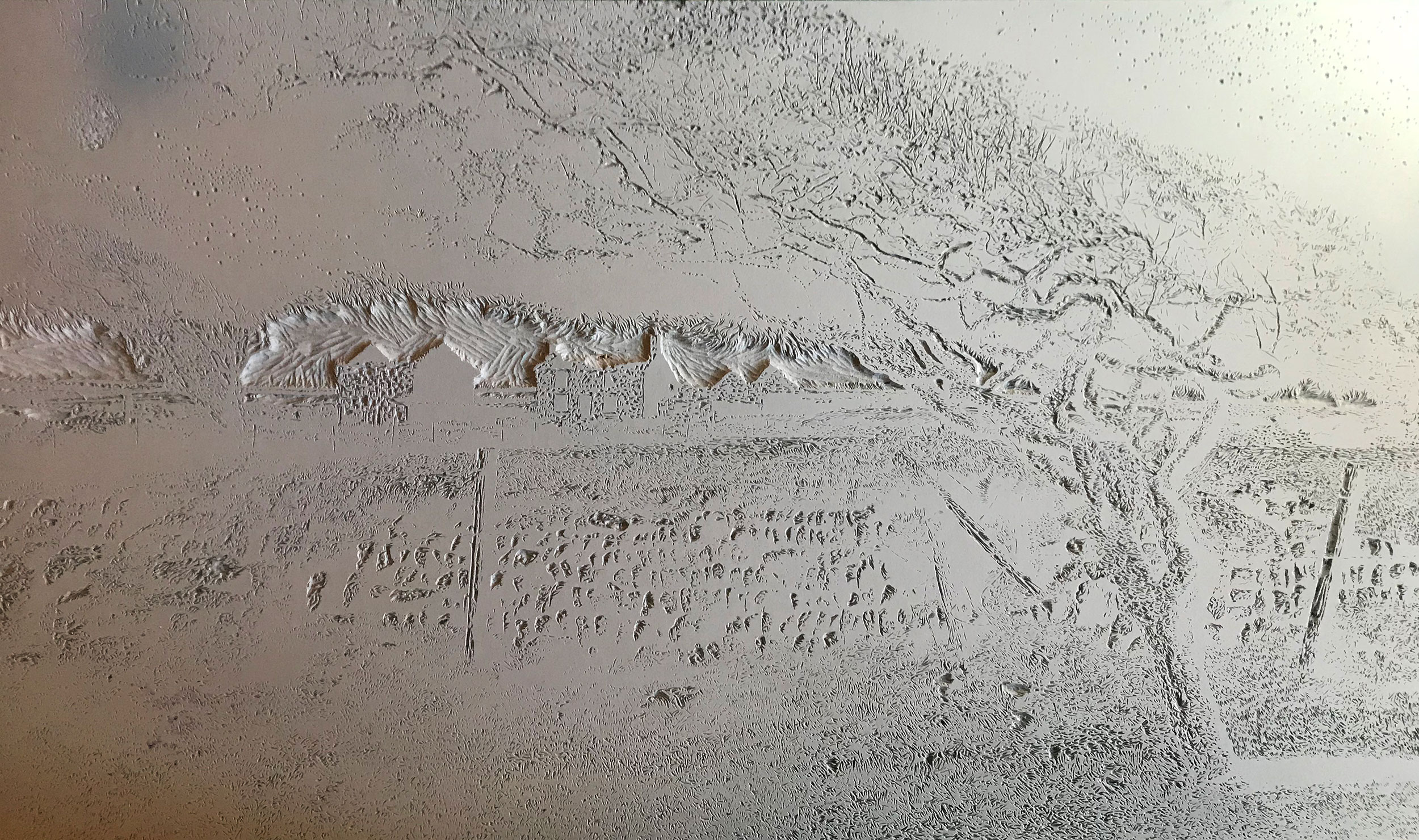 After about 35 hours of cutting, here's the finished lino block - ready to proof. 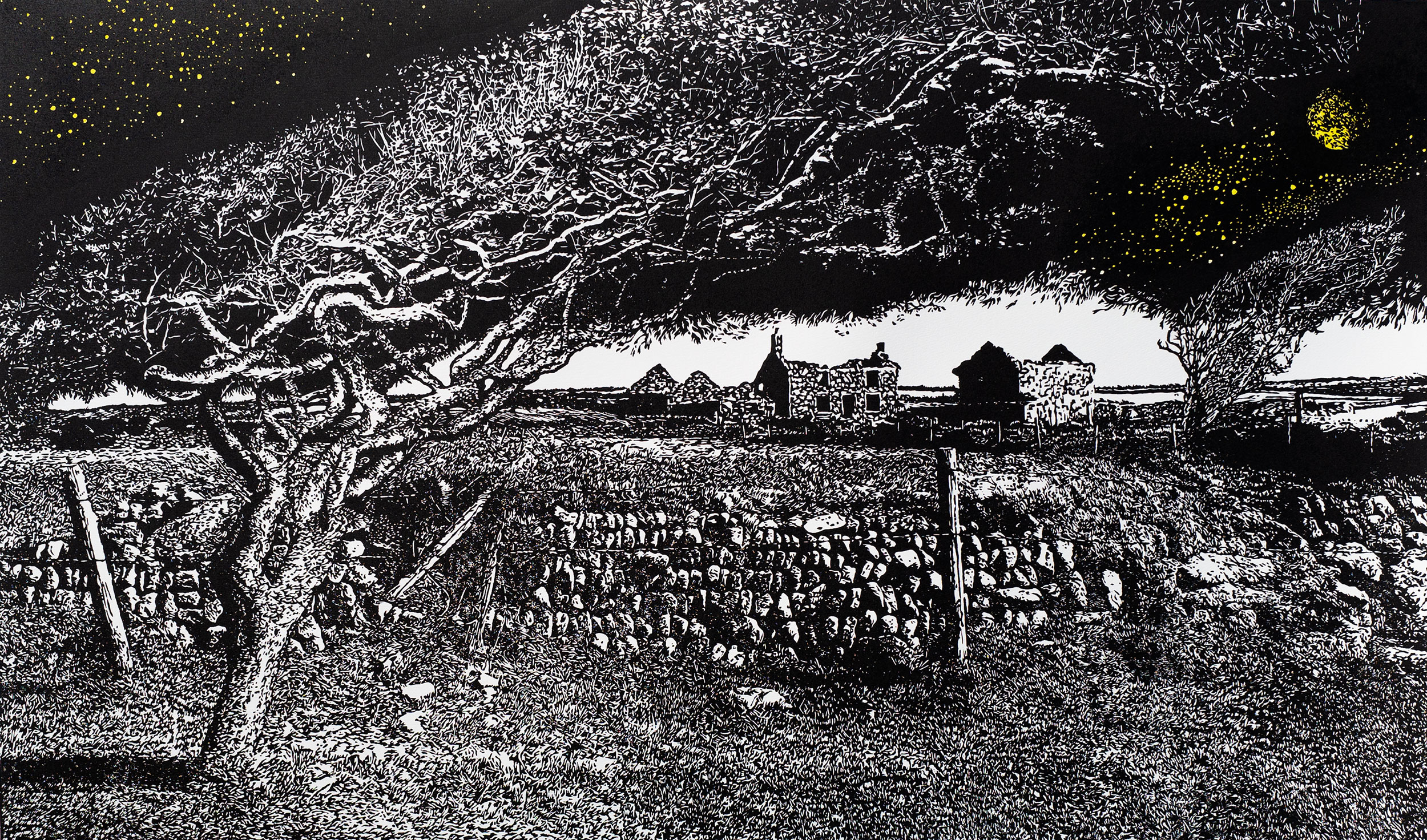 And here is the finished print! In the end, I decided to add just one additional colour - yellow for the moon and stars.

It's right and proper for everyone to arrive at their personal take on an image - for me, this image is about the sense, not only of time passing, but of the way time passes at different speeds - from the ruins, over which time has passed, to the growing speed of the trees, to the time occupied by the moon and the stars. And I deliberately included the fence posts with the barbed wire strung between them, because they seemed to say something about the futility of trying to fight against the effects of time - and the irony of their being used as if they might prove to be more durable than the older structure of the wall itself was, I thought, particularly amusing. Hubris, I think it's called. 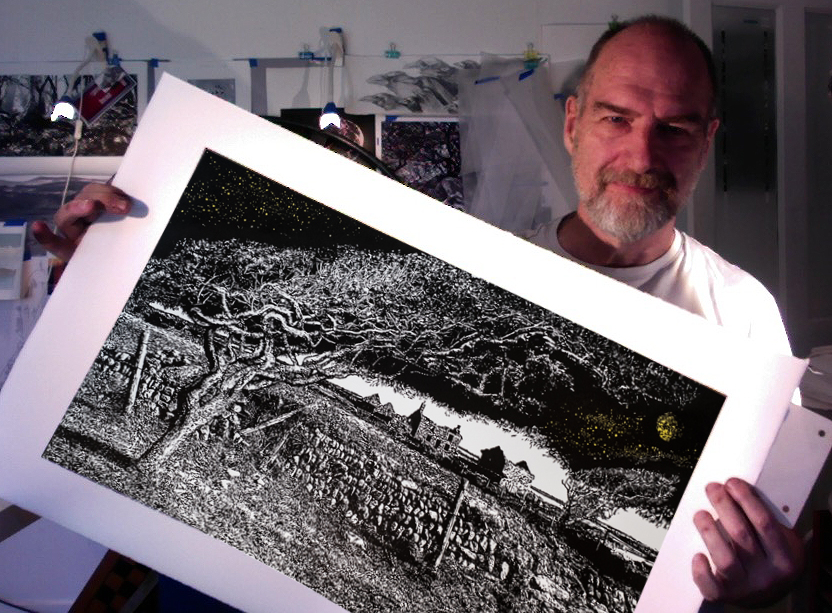 And I'm pleased to tell you that you can buy this print today! And. what's more, it's on special offer until the end of April 2021... click here if you're interested
Connect