Creating 'Forest of One'

For this walkthrough, I've decided to focus on some of the photo-related processes I use.

I trained as an illustrator - working with pen and ink - so drawing has been something I've done for decades. The images I've produced as a photographer have always been a separate endeavour. I was never particularly interested in bringing the two together until I discovered relief printing, and the kind of magic that happens when you use photographic source and have to cut out the lines and shapes and textures with a gouge. The end result will alway be a set of marks made with those cutting tools, but that combination of a photo-derived image, cut by hand into the surface of the lino, can result in an intriguing, sometimes visually-challenging, and often complex, output that takes the source image to a different place - one where colour and tone may have been vastly simplified, and yet, they appear more complex than the images I can achieve with the camera alone.

Having said all that, it may appear that the end result is a facsimile of a photo - another way of producing what is, in the end, a kind of photograph. But if my work gives that impression then that's ok - I'm not interested in having the technical process become the point of the images - I want the images to speak. My job is to draw from my source material (which is actually the subject, rather than any photograph or drawing) what I feel lies beneath its 'obvious surface'. 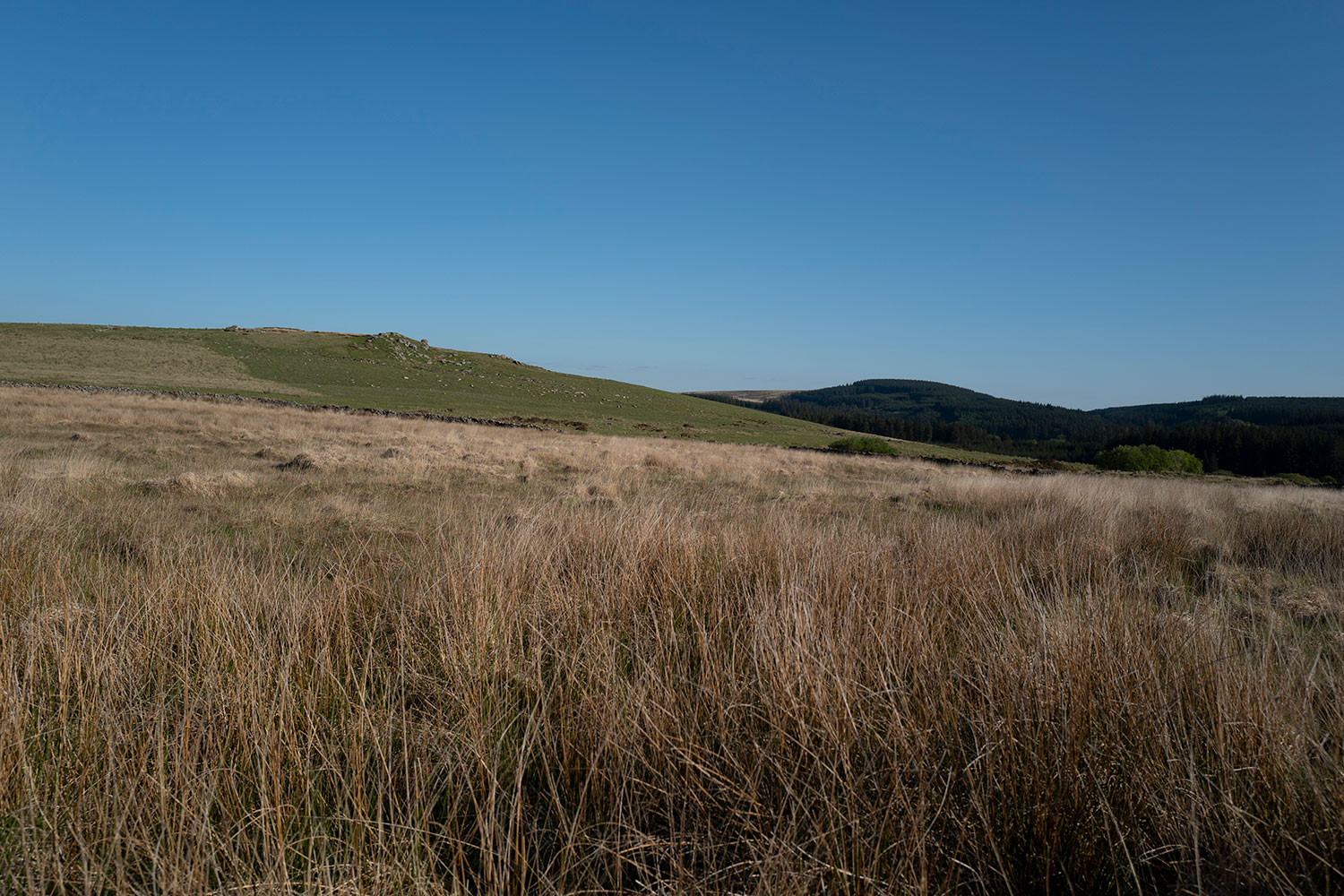 Because I've been making a lot of prints of trees recently, I felt like a change, and decided to work with with landscape. The picture above was my starting point. I like the gentle slopes of the hill with the tor and forested hillside nearby, and the quality of the grasses in the foreground. This image is a fairly typical capture of dartmoor on a sunny day.

Having chosen the image I want to work with, I dispense with the full-colour photograph. I use the Photoshop 'Threshold' filter to turn the image into nothing but pure black and white - no greys even. Not all photos respond as I want them to, but with a bit of tweaking I usually get where I want to go.

Above - this is the image reduced to black and white. Using the filter, the distributon of blacks and whites is hugely variable to the point where the image either whites out or blacks out - the trick is to choose the point on the scale that gives you the detail you're looking for. With some images, I apply different threshold levels to different parts, and then make a collage of the bits that work. For instance, the forest on the right-hand side of this image has too little detail, so I focused on that part of the source photo:

Above: drawing out the detail from the forest element

Above: the revised image, with the now more detailed forest element in place.

As an initial concept this is working fine, but I have this thing about trees, and I had a really nice photo of one from a visit I'd made to the moor around the same time I took the first picture... 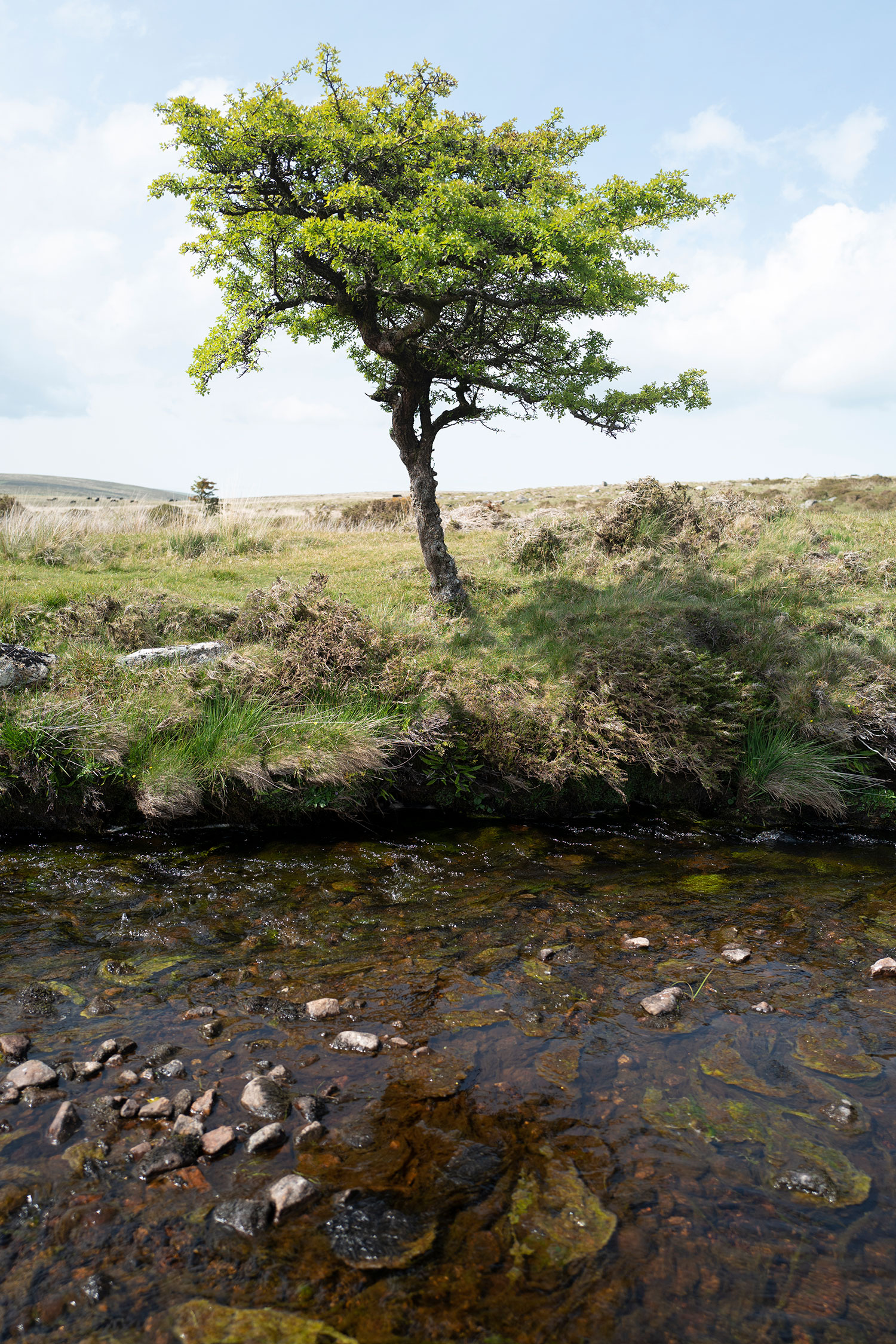 Although this image has a lot going for it in its own right, I decided to take the tree and use it with the landscape picture. 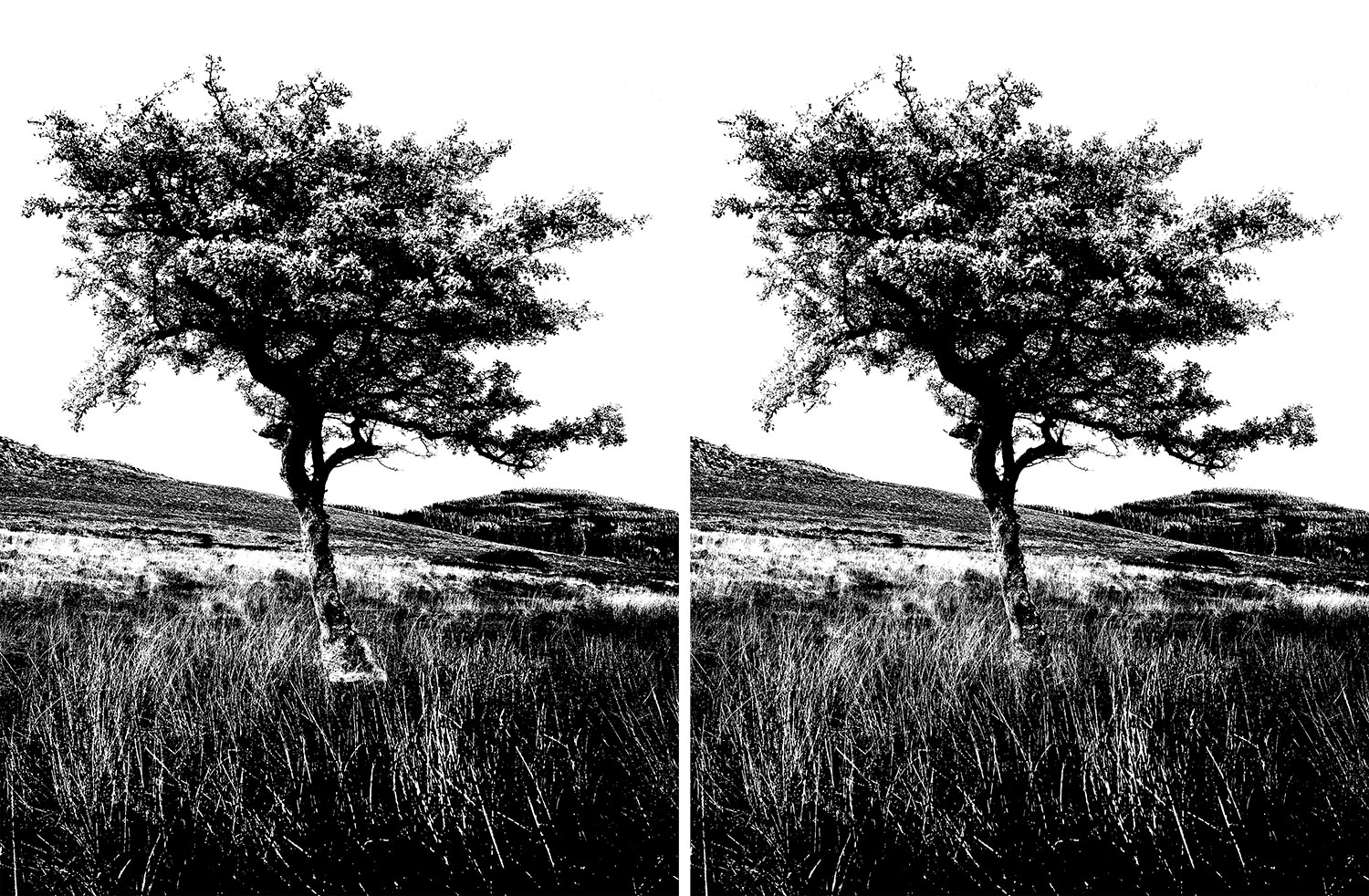 Above - the tree in two stages - first the cutout, positioned so it fits in the landscape, then, on the right, after a little work on the base of its trunk to blend it with the grass.

Next, to colour tests,

Photoshop is handy for this. I make a single layer image of the components I've put together, then I select all the whites and delete them - leaving transparent the places that were previously opaque. 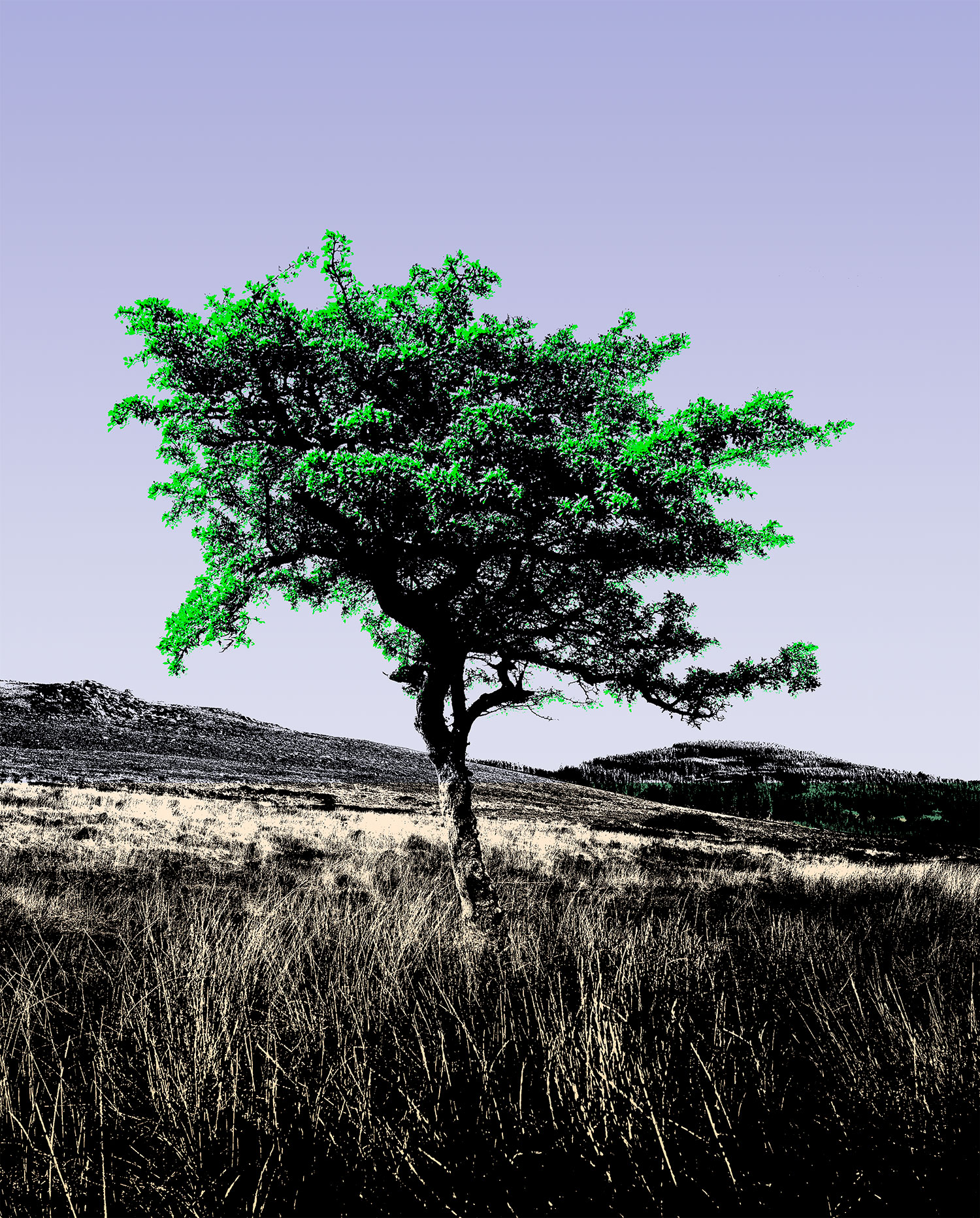 Above; this is a detail of my first colour test. It's ok, but the sky is a little... boring. I wanted to add something. My initial thought was to place some simple floaty cumuli. So I went in search of sky, and found this photo, which was taken on the same day as that of the tree: 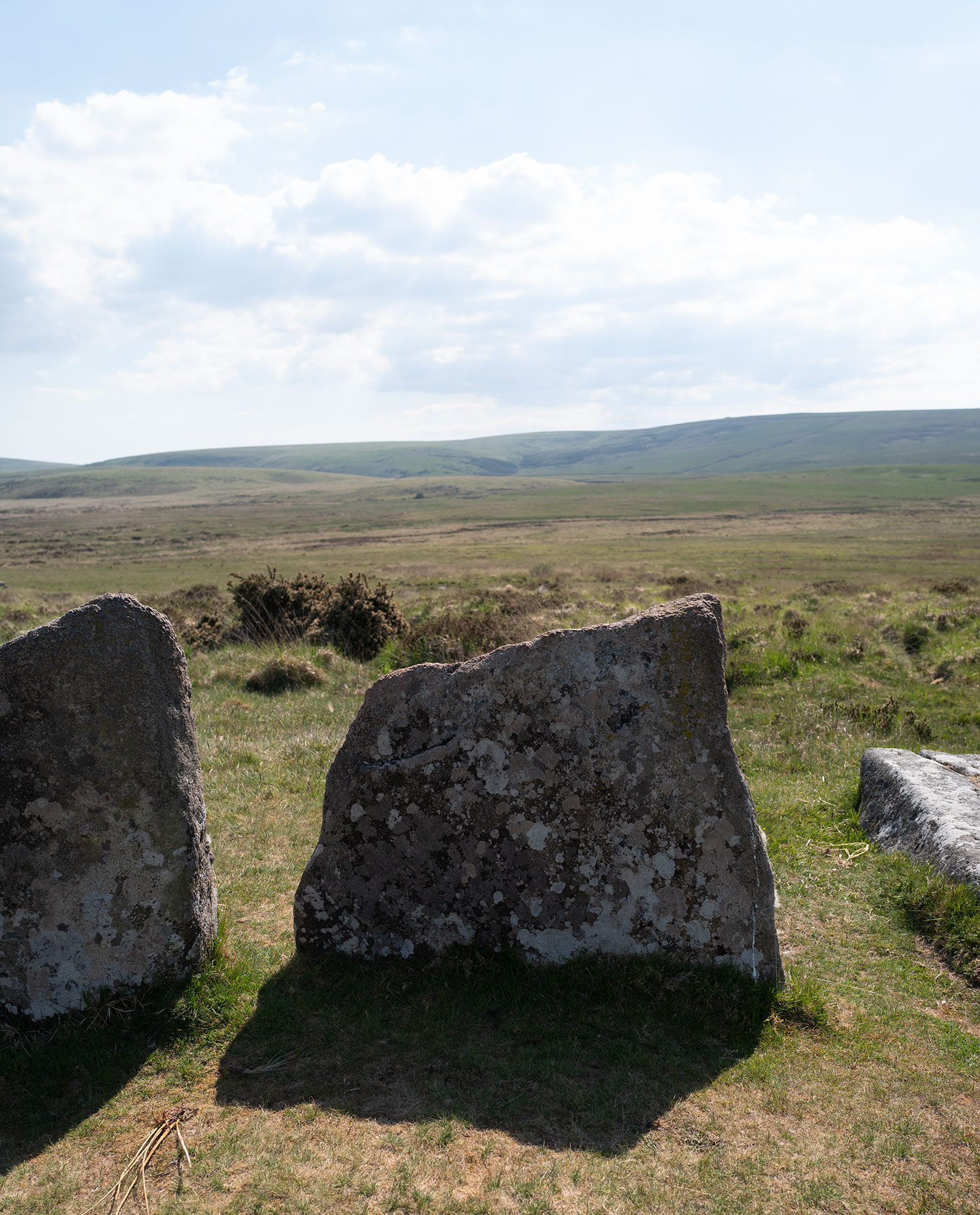 The stones are for another day. For now, I need a sky.

It's surprising what a little digital maniplulation can cause to appear...

Yes, if you look closely, this is the same sky - but with the threshold turned all the way up to 'very black'...

I love the way you can now see rays of sunlight pouring from the clouds - and the more solid trunk-like apparition, which looks like heavy, thundery, rain.

I placed this sky behind the tree, did a little trimming and experimenting until...

...here's the final colour concept (still just a layered Photoshop image - not a print!) - with gradesapplied to the clouds and grasses, and another layer of lighter green for the leaves of the tree: 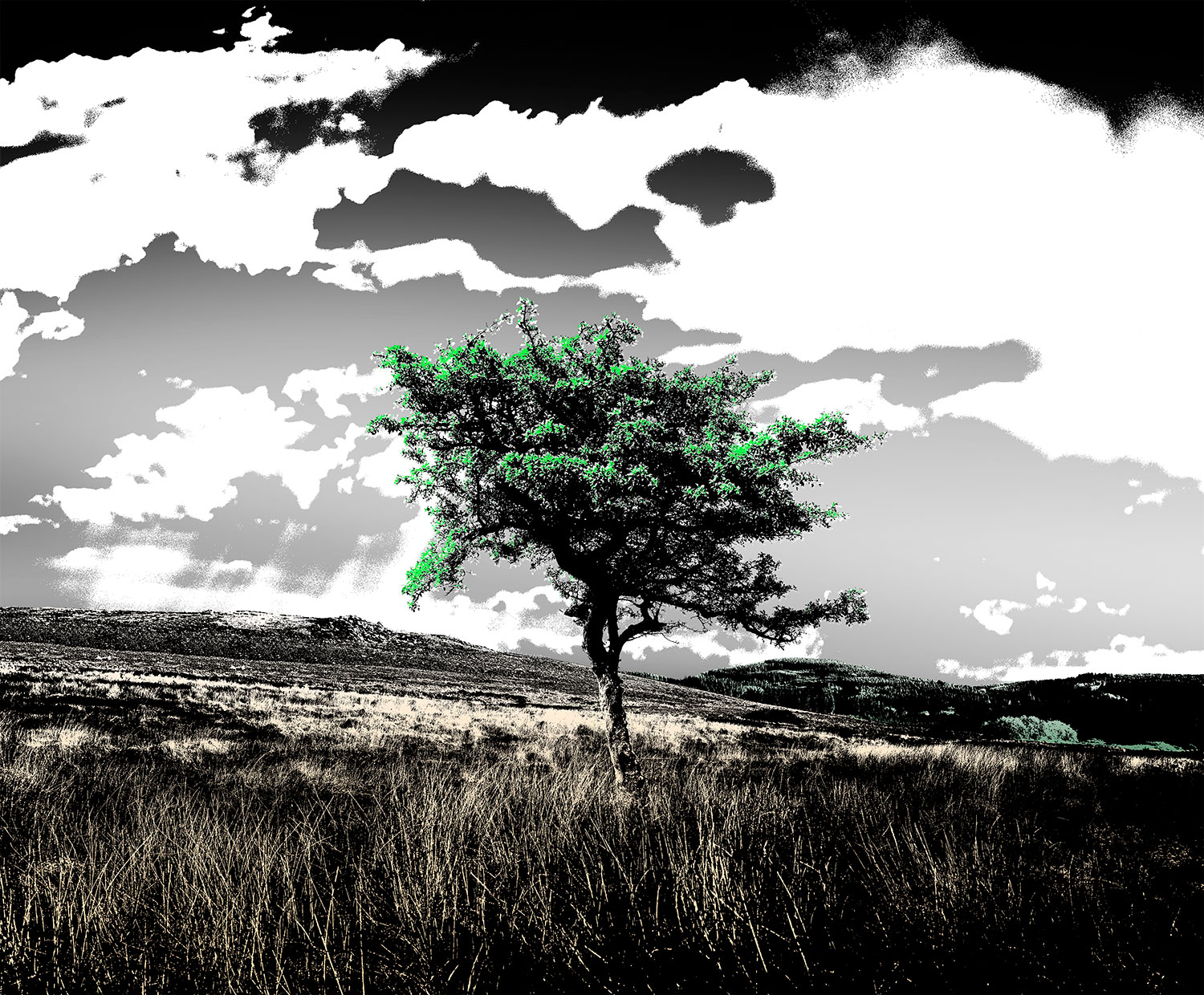 All the time I'm preparing the image I'm thinking about how I'm going to cut it and print it.

In my master Photoshop image I assign the separate blocks that will need to be cut to separate layers, all the time, trying to keep the number of blocks as small as possible (the more blocks, the more difficult becomes registration during printing - not to mention the additional time required to do the cutting. But, more importantly, a smaller number of blocks results in a print that is, in my view, 'truer' to the medium - four is more than enough, I think.

And here are the blocks, separated out: 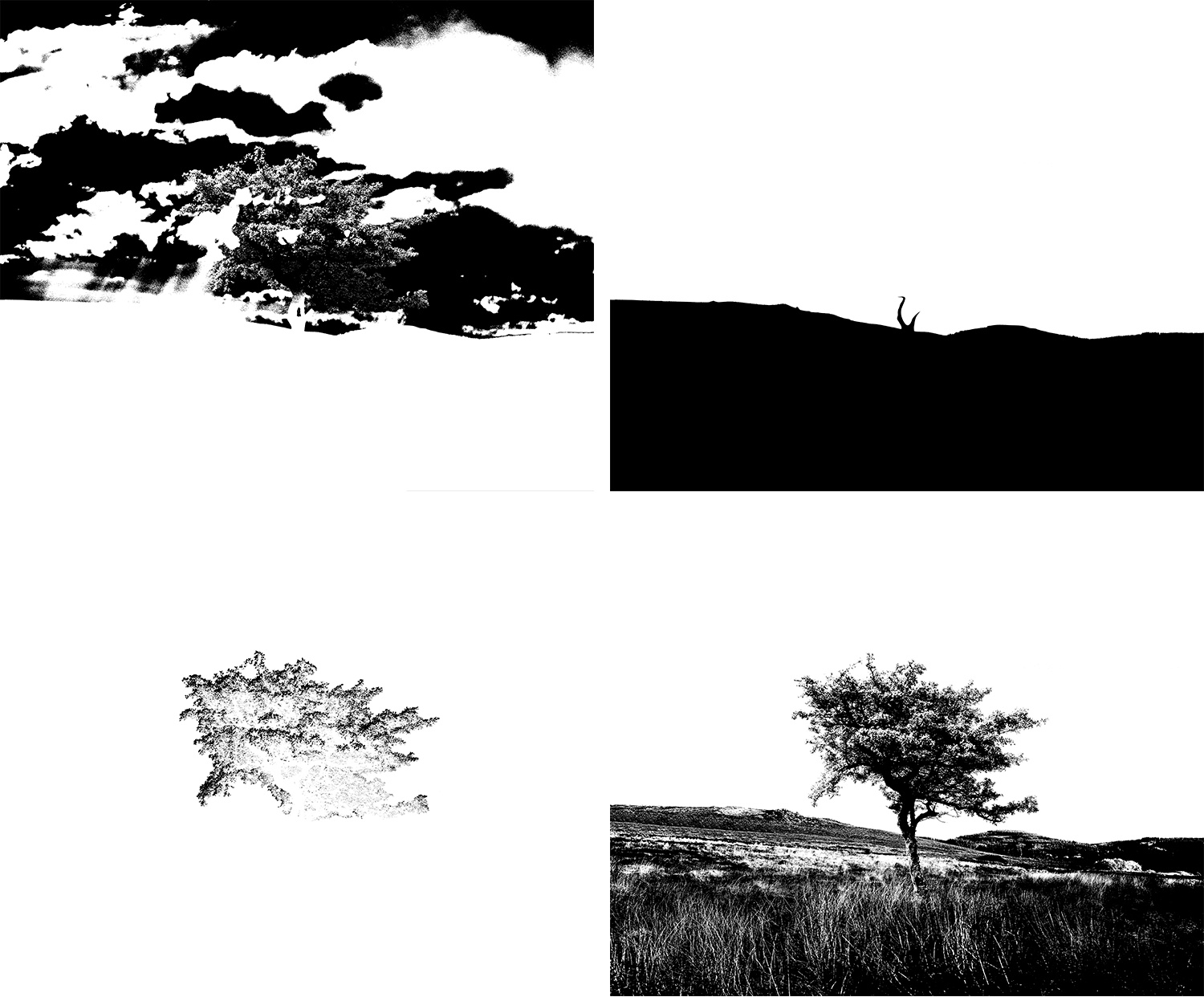 From top left to right etc:

Block 1 - the clouds/sky. This block will be printed using a grade (one colour fading into another). All the white has to be cut away. The detail of the tree is included so that there will be no colour for the subsequent leaf block to print over - this means the colour of the leaves won't be affected by an underlying colour.

Block 2 - the foreground landscape - the grasses etc. Another grade will be applied here - at the same time, I will also ink the element where the forest is - with a band of darker geen that will appear through the detail planned in the earlier image above. The two curly prongs in the centre will result in a little sandy brown trailing up into the trunk of the tree.

Block 3 - as with the others, all the white will be cut away - the remaining black detail will carry the green of the leaves. I'm anticipating that it will be almost impossible to accurately register with the white leaf shapes from block 1 - it's inevitable that some elements of white will show around around the leaves - but that's fine, it'll add to the effect of light dappling the leaves.

Block 4 - this is the block that ties everything together and defines the final image.

Above - the cutting well underway for the sky and clouds. As soon as I began cutting I knew I had to cut directional lines to represent the energy flow in the clouds. The flow lines are imagined.

Above - a second-stage proof of the sky and clouds. Note - this is in black ink - but in the final print the colour will be a much lighter gradient. I've also cut awaye the shapes of the tree leaves so that there will be areas where they're paper-white. There's still more cutting to do to refine this. 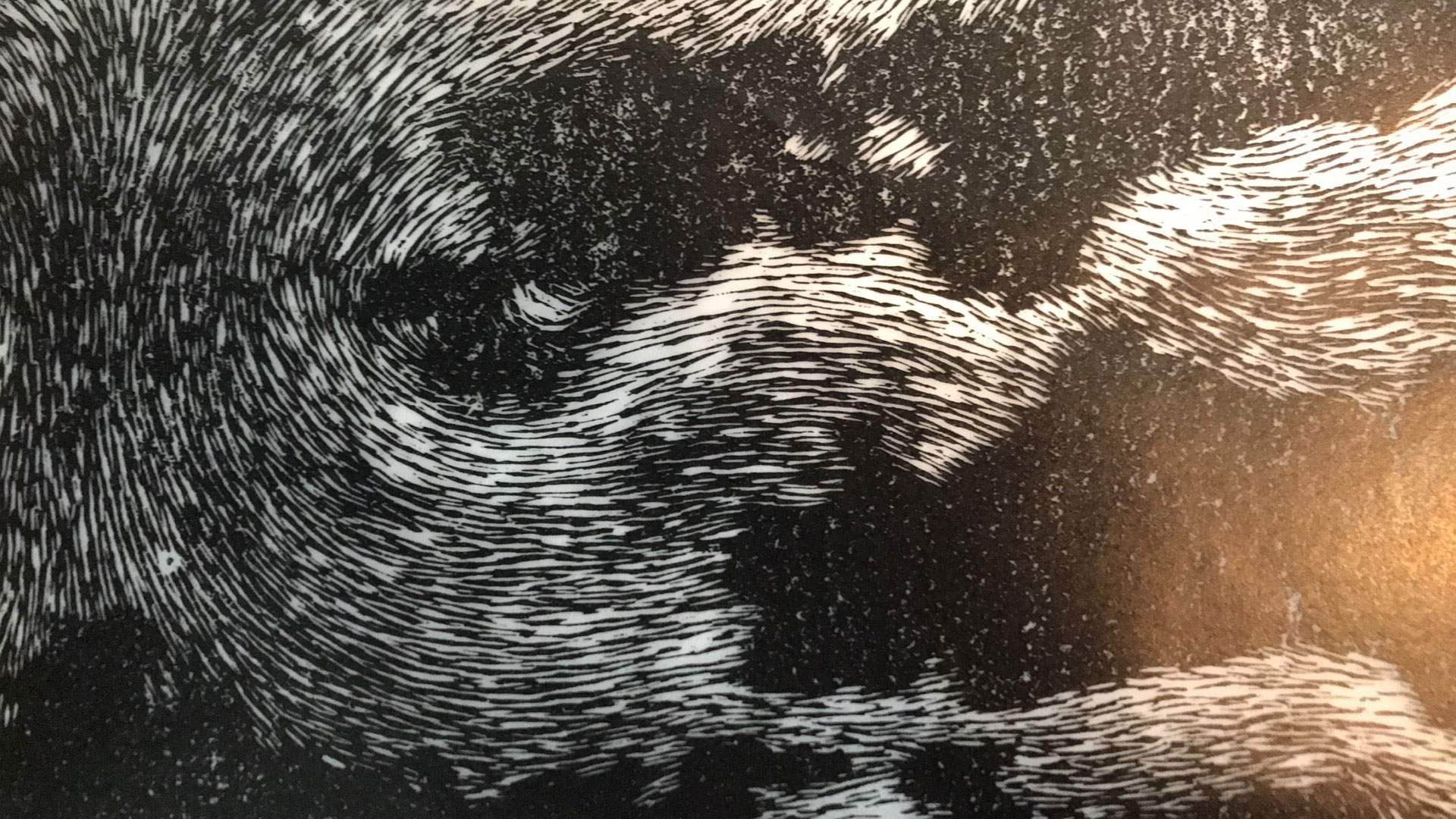 Above - a detail from the second-stage proof.

Above - colourways for the sky - beginning with colours that most closely match part of my source photo, shifting to a more dramatic colourway. The chosen colours (right-hand strip) are applied to a 'shorter' grade in order not to obscure foreground image layers. 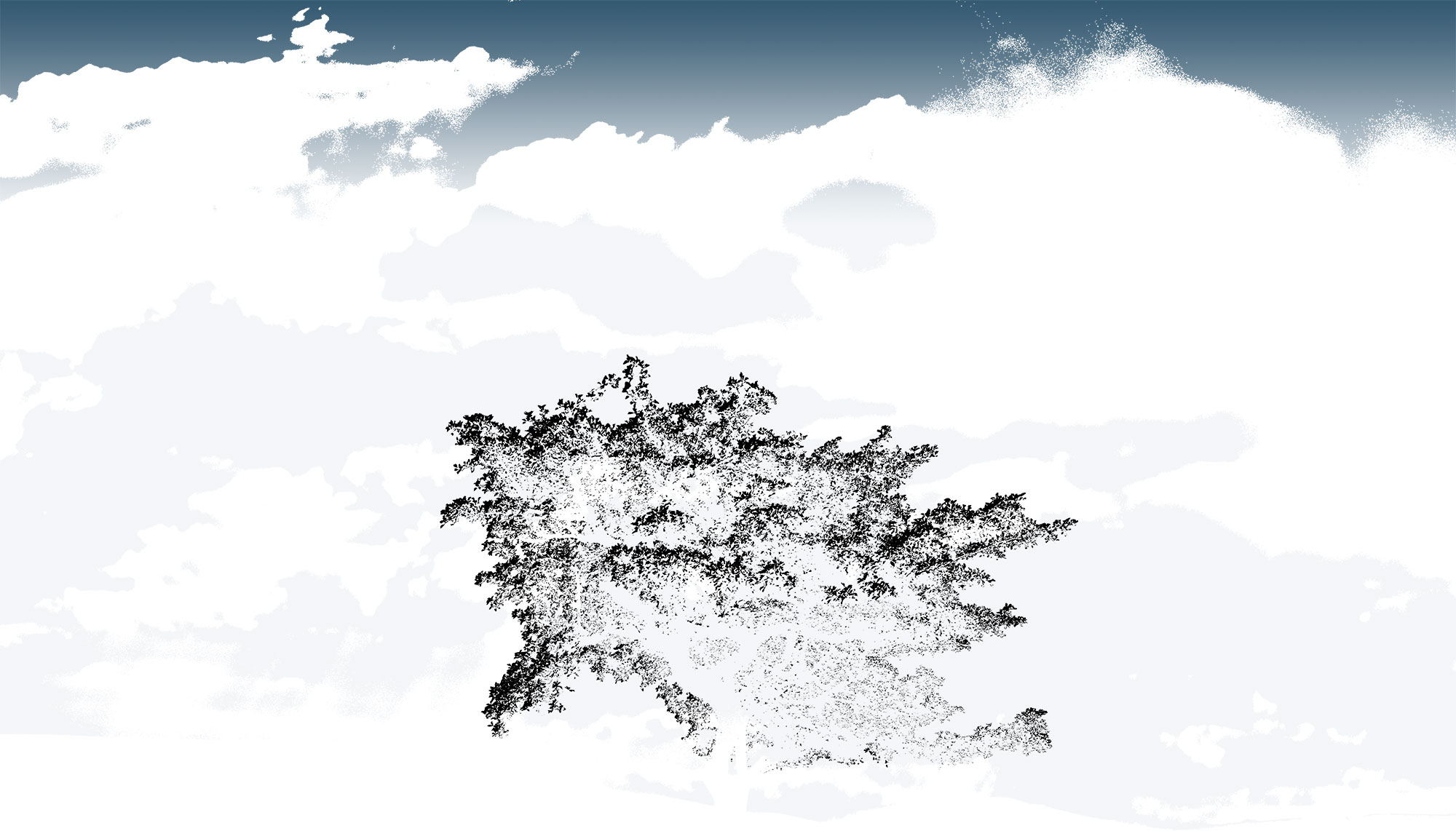 Above: testing my preferred sky colourway using the 'shorter' grade. 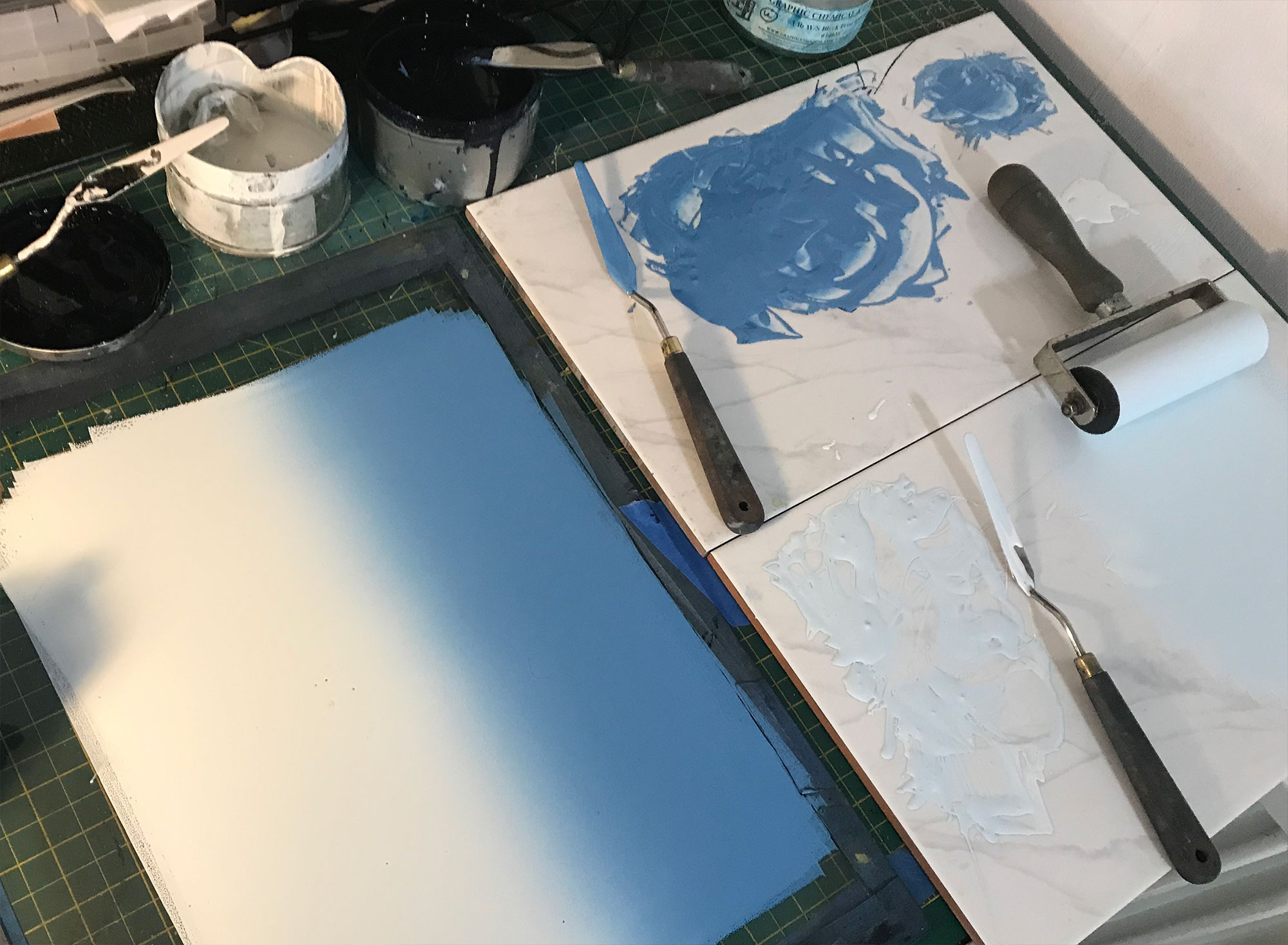 Above - first go at mixing the sky colour - after this I added some black to make the blue a little denser.

Above: Three versions for the sky - I think the one on the right will work best but until more layers are added it's hard to tell... not very much like the digital visual I produced earlier, but you have to let the technique have some say in the matter :-)

An important learning note... if you decide to proof a block DON"T print it using any colour except one that's close to the final print colour. I don't usually produce proofs so, in this case, I thoughtlessly printed a few with black ink... big mistake... removing the residue of the black before printing the blues was a nightmare that has probably wasted half the prints I was working on. But you live and learn...

Above: my colour planning for the foreground.

A: A section from my original photo
B: Original photo brightened (to compensate for the darkening effect of the final black print layer)
C: Grade based on colours picked from B
D: Same colour picks as C but using an adjusted range of fade
E: Further lightening of the picked colours - I'll probably try to aim for this 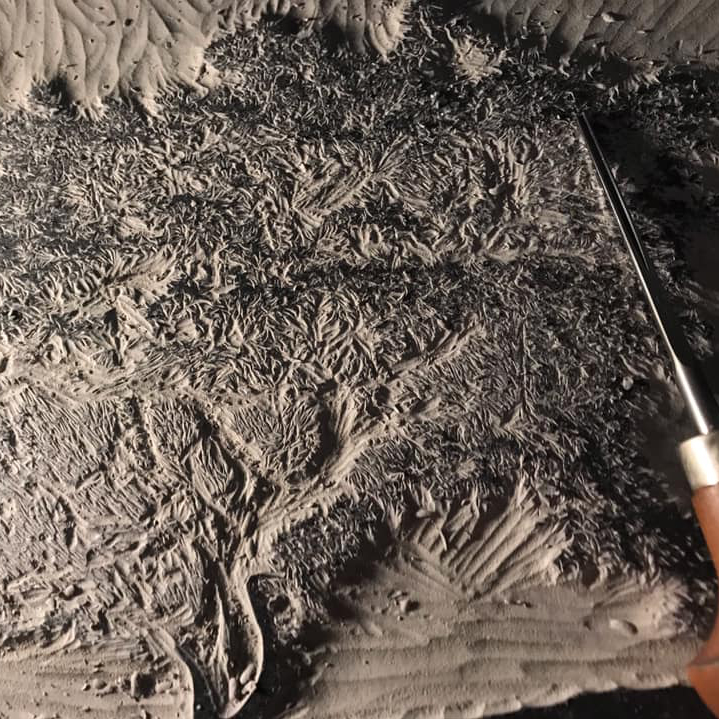 Above: this is part-way through cutting the block for the light-coloured tree leaves. 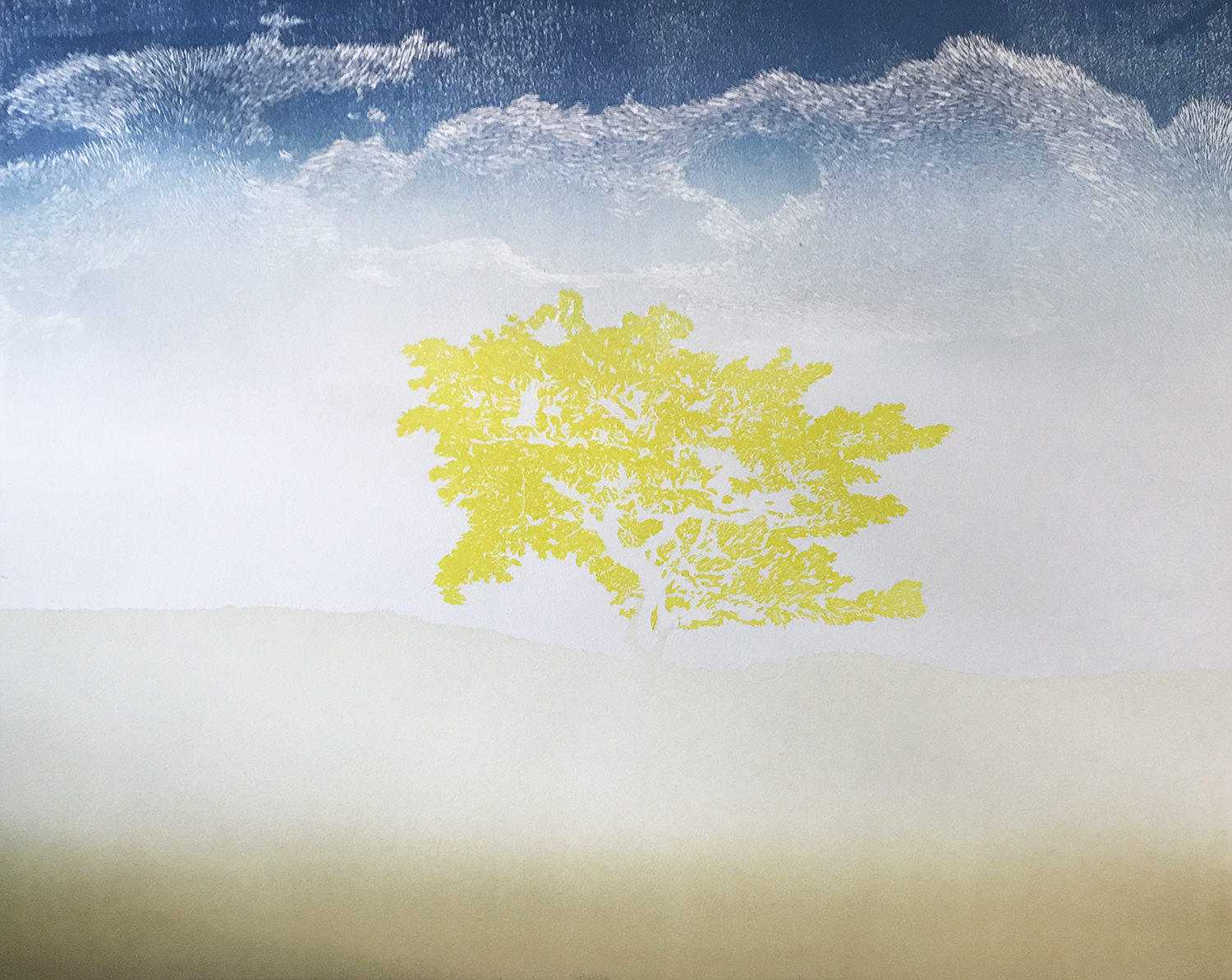 Above: After printing the light-coloured tree leaves. This isn't a great image, but it illustrates this penultimate stage in the process. As usual, the print itself is much nicer to look at in real life. 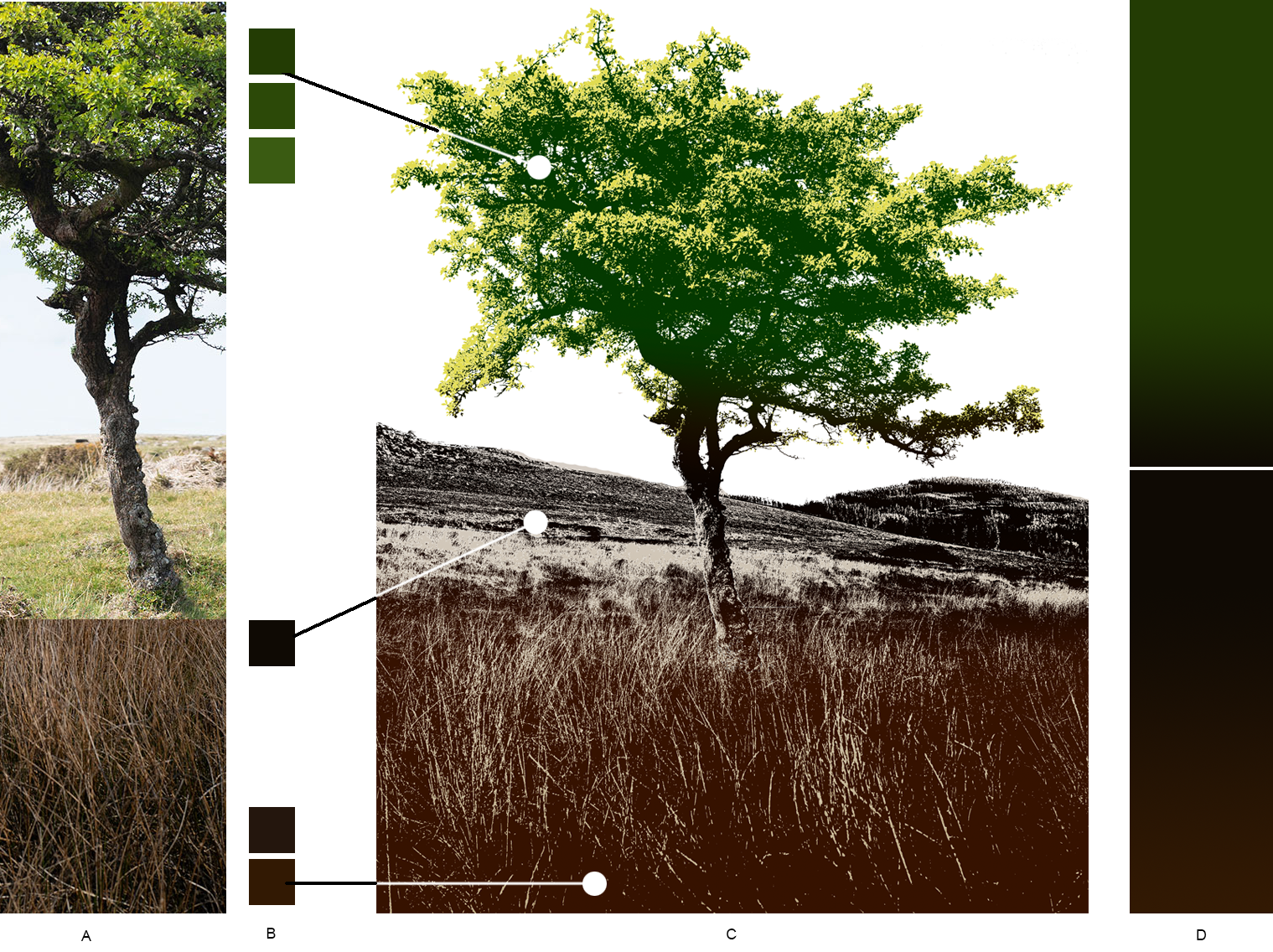 Above: My planning for the foreground colours. These will be applied using two rollers.

A - Sections of the original source photos
B - Various colour picks from the source photos - I tested these in Photoshop on versions of C
C - My preferred Photoshop mock-up
D - The two grades that are required to achieve C. The colour at the meeting point is the same - so I can ink with two rollers without a 'join' line where they meet. I could have inked a single roller to achieve the complete grade, but I would have less control over the dispersal of the ink on the roller

This may seem like colour planning overkill, but I'm not so good at imagining which colours will work. In fact, my first preference for the dark green of the leaves was for the lighter of the three green colour picks - but, on testing in Photoshop, it was clear this would have been too light. When you've been cutting for maybe 100 hours to get to this stage, and you're down to about 15 prints left to work with, you really don't want to waste everything by choosing the wrong colours at this final stage of the process! 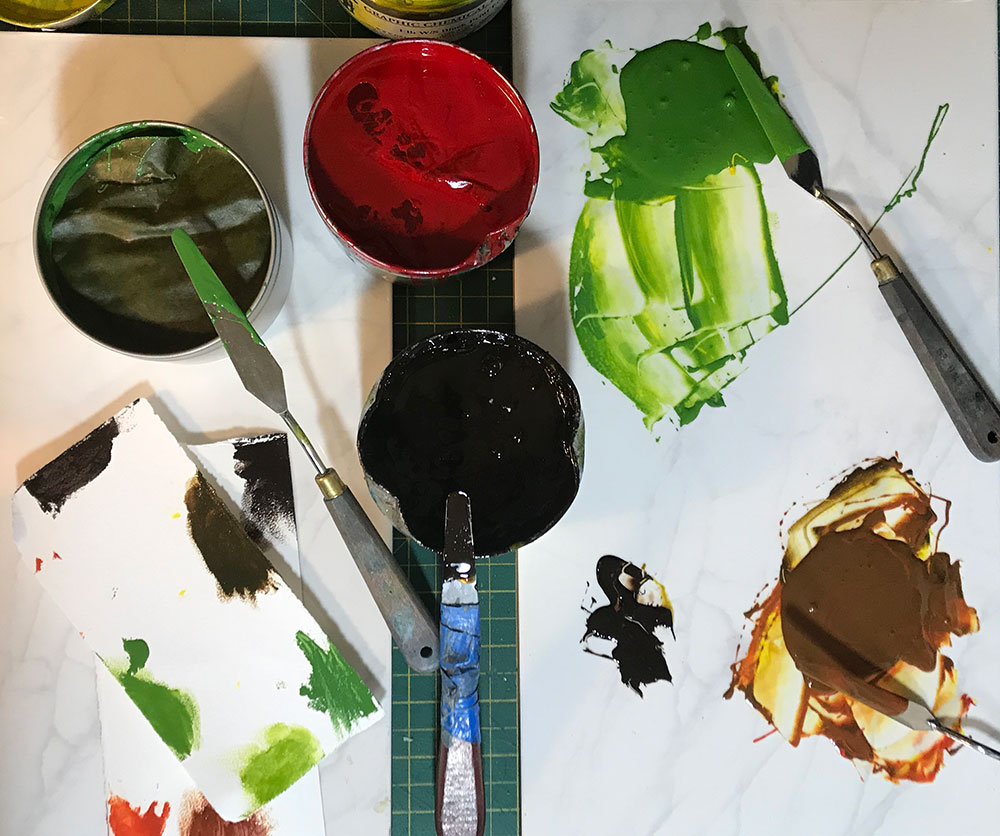 Above: mixing ink for the foreground print layer 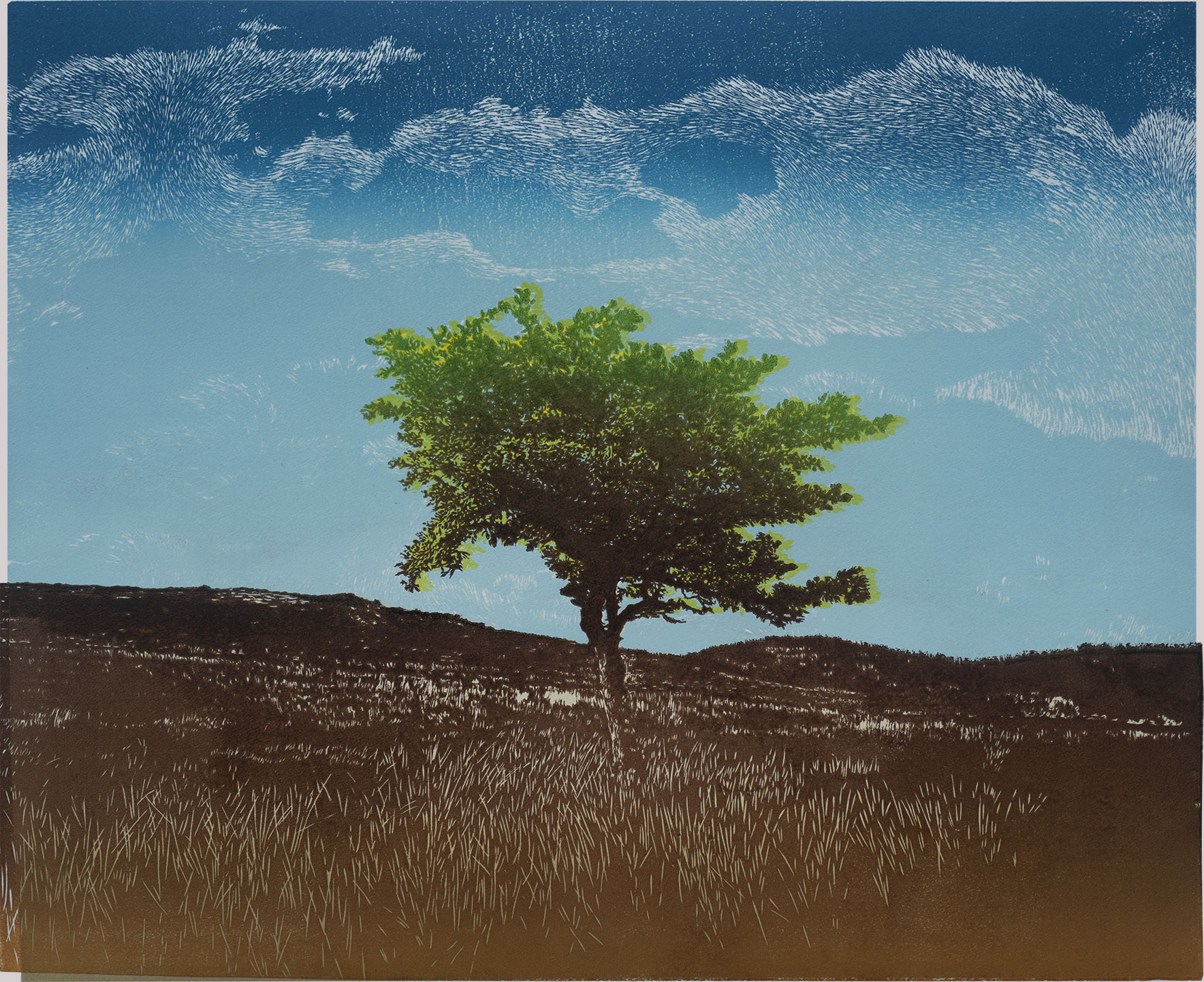 Above: the finished print (click the image to see it at a larger size)

Despite all my efforts to plan the colours for the final layer, I had to adjust them quite a bit. I use Graphic Chemical water-based inks which are bit idiosynchratic - especially the greens and yellows, which tend to be a bit thin and transparent - and they don't like mixing with some other GC inks.

At 52 x 43cm (image area, not including borders), this is the largest print I've made on my Gunnings No.2 press.

I won't know until tomorrow if I'm happy with the print - it always takes me about 24 hours to get over the trauma of printing and for the latest colours to settle into the paper.