I recently spent a day at the Bainbridge Print in South London learning the basics of Photopolymer Etching. Hands-on learning from an expert (the very talented Phrosy Andrews) in a small group workshop (there were only two of us in attendance!) is a great way to gain a lot of information in a very short time.

I came across photopolymer etching at a craft fair where an illustrator had used it to produce prints of some of her drawings. I was immediatey attracted to the process because I like the idea of being able to print my own drawings in a way that keeps them close in quality to the original but also adds some of the flavour of an etching.

The technique tends to be used most in the production of prints using photographs as source.

The image below is a photopolymer etching I produced during the course from a photo I took on Dartmoor: 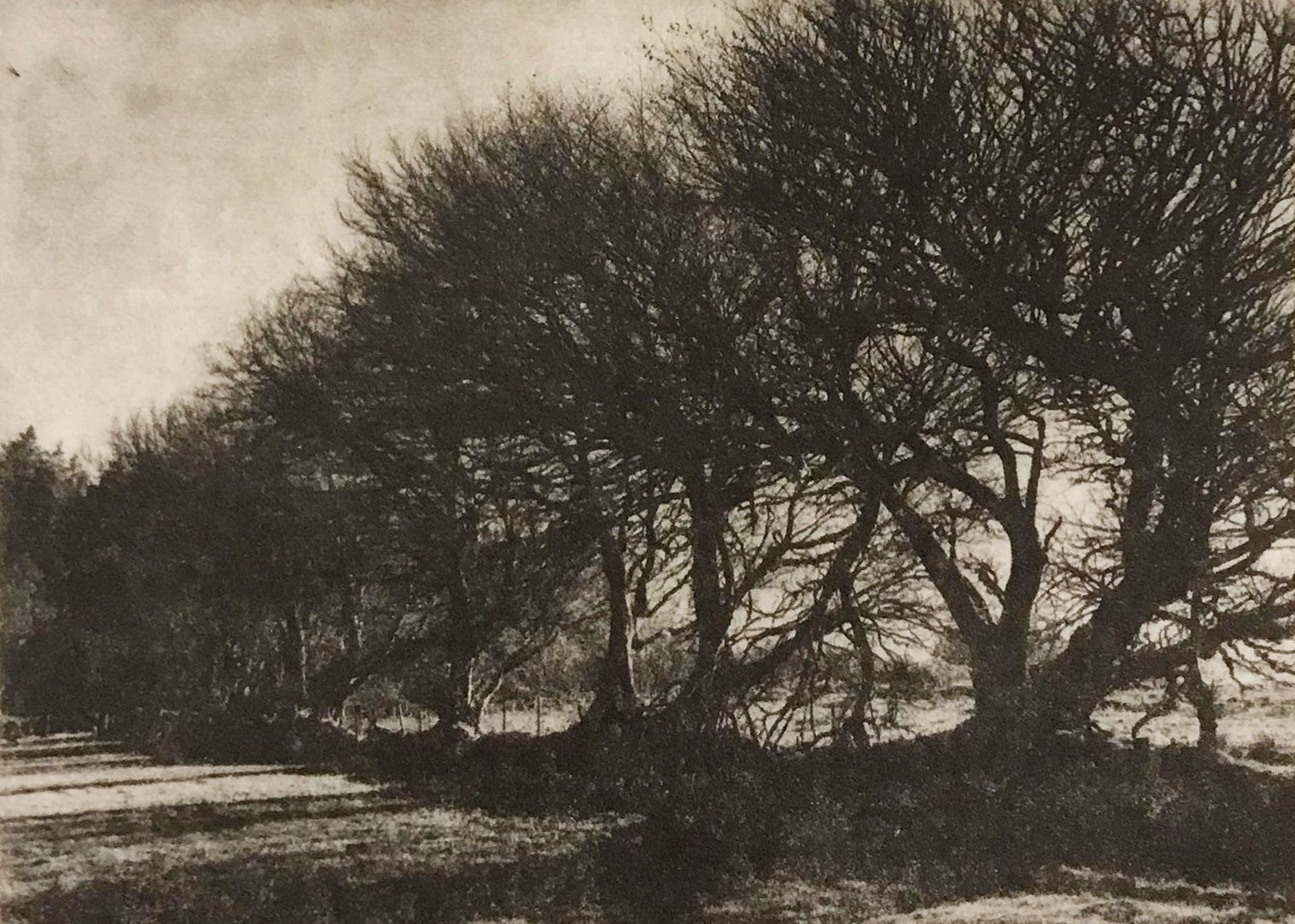 If you're familiar with etching, you'll know that it involves coating a metal plate with an acid-resistent film. The artist draws by scratching through the film to reveal the metal below. When the drawing stage is finished, the plate is placed in a bath of acid, which burns into the exposed metal. You then remove the coating from the plate, rub ink into the etched surface (this is an intaglio process) and you pull your print using an etching press.

There's a lot more to traditional etching, obviously, but the above covers the basics.

With photopolymer etching, instead of the acid-resistent covering, you use a photo-sensitive one (pre-prepared plates are usually purchased from suppliers like Intaglio Print).  You transfer the image you want to print onto transparent film (another service that is often purchased from a specialist provider), which is placed on top of the coated plate. The plate is then exposed to UV light, which allows the exposed photopolymer (the bits that haven't been protected from the UV light by the dark parts of the transparency) to be washed away - with water - there's no acid involved in this process.

The clever thing with photopolymer etching is that the surface that will retainthe ink has not been etched into the metal plate - it's the coating itself that is 'etched' - to varying depths, depending on the amount of UV exposure it receives.

After that, everything is much the same as for traditional etching. 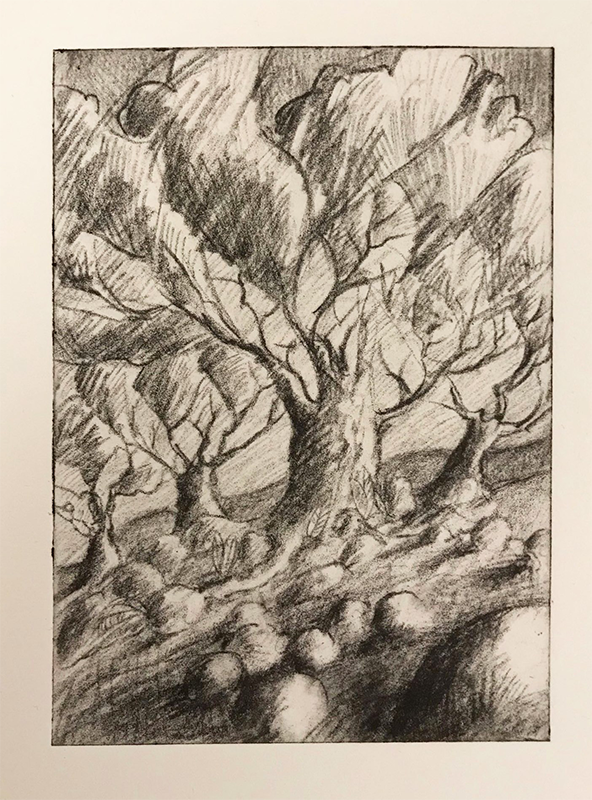 Remember I mentioned being interested in producing prints of drawings?

I assumed it would be necessary to get a transparency produced from a drawing in the same way as with the photo above and, yes, this can be the case - but there's an even better way...

...drawing onto a special acetate that has a fine grain on one side (the product Intaglip sell is called Truegrain), using almost any medium - from pencil to crayon, ink to watercolour paint - you can produce a hand-made transparency which is then placed over the photopolymer and exposed to UV light - in the same way as described with the photo (top).

The drawn image shown here was produced and printed during the workshop.

This is like getting two printing methods for the price of one! A means of producing a photogravure-like effect using photographic source and one that enables drawings to be turned immediately into prints. In both cases, the resulting prints have a lovely warm look and feel.

Photopolymer etching is a little more expensive than the linocut printing I've been doing (and will continue to do!). You need a UV light box, for one thing, and preferably one with a vacuum facility to hold the transparency close to the photopolymer. UV light boxes appear to be available for £300-£500 (let me know if there's one you would recommend).

And then, there's the press. The one I use for lino printing is sold as being able to handle etching, but I still have to test it to check that that claim is true. I'm doubtful, but there's a chance it will work. I've bought some etching ink... so I'll soon be trying to produce prints from the plates I made on the course. I'll update this page with the results.

Even a small etching press can set you back over £1500 - which is why I've been checking out communal press studios - that may be the route to go if I want to progress with photopolymer etching - which I do.

If you know of a reliable press going for a sensible price, let me know... I'm in the market for one!

There's a ton more you need to know about photopolymer etching... so check out the workshops at Bainbridge Print, or wherever else you go to learn interesting stuff about art.